The Massive Impact of Your Takeout Coffee Cup

Editorial Note: The 2020 coronavirus pandemic led to food safety concerns about the use of reusable containers, including coffee cups and shopping bags, increasing the use of single-use plastics around the country. Read our update on the conversation, including a widespread pulling back of single-use plastic bans and research showing that reusables do not present a danger when it comes to virus transmission.

The next time you order a vanilla latte to go, consider this: We use an estimated 16 billion disposable coffee cups each year. The single-use cups (along with lids, sleeves and stir sticks) are often made with hard-to-recycle materials like Styrofoam, polyethylene or polypropylene that are sent straight to the landfill.

Concerns over single-use plastics led several coffee companies to swap out their cups or introduce new innovations but is it enough to combat the waste created by our addiction to both caffeine and convenience?

The Problem with Disposable Coffee Cups

Styrofoam has long been the go-to choice for coffee cups because the inexpensive material retains heat, according to Martin Mulvihill Ph.D., chemist and co-founder of Safer Made, a mission-driven venture capital firm. But all polystyrene products, including Styrofoam, are made from synthetic resins, polyesters and plastics that take more than a million years to decompose in the landfill.

Dunkin’ Donuts announced that it would completely eliminate polystyrene cups in its stores by 2020, replacing them with double-walled paper cups made from Sustainable Forestry Initiative-certified paperboard. The coffee chain has already started rolling out the new cups in some of its stores. Starbucks has been using paper cups made with 10 percent recycled content since 2006 and plans to double the recycled content, recyclability, compostability and reusability of its cups in the next three years. Stumptown also uses cups made from recyclable materials in all of its locations.

Paper cups might seem like a better option but, on its own, paper cannot hold liquid so baristas pour coffee into cups lined with polyethylene, a plastic that functions as a moisture barrier. The lining must be separated from the cup before the paper portion can be recycled, explains Rachel A. Meidl PhD, a fellow in Energy and Environment in the Center for Energy Studies at Rice University.

Tips for Being a Better Recycler 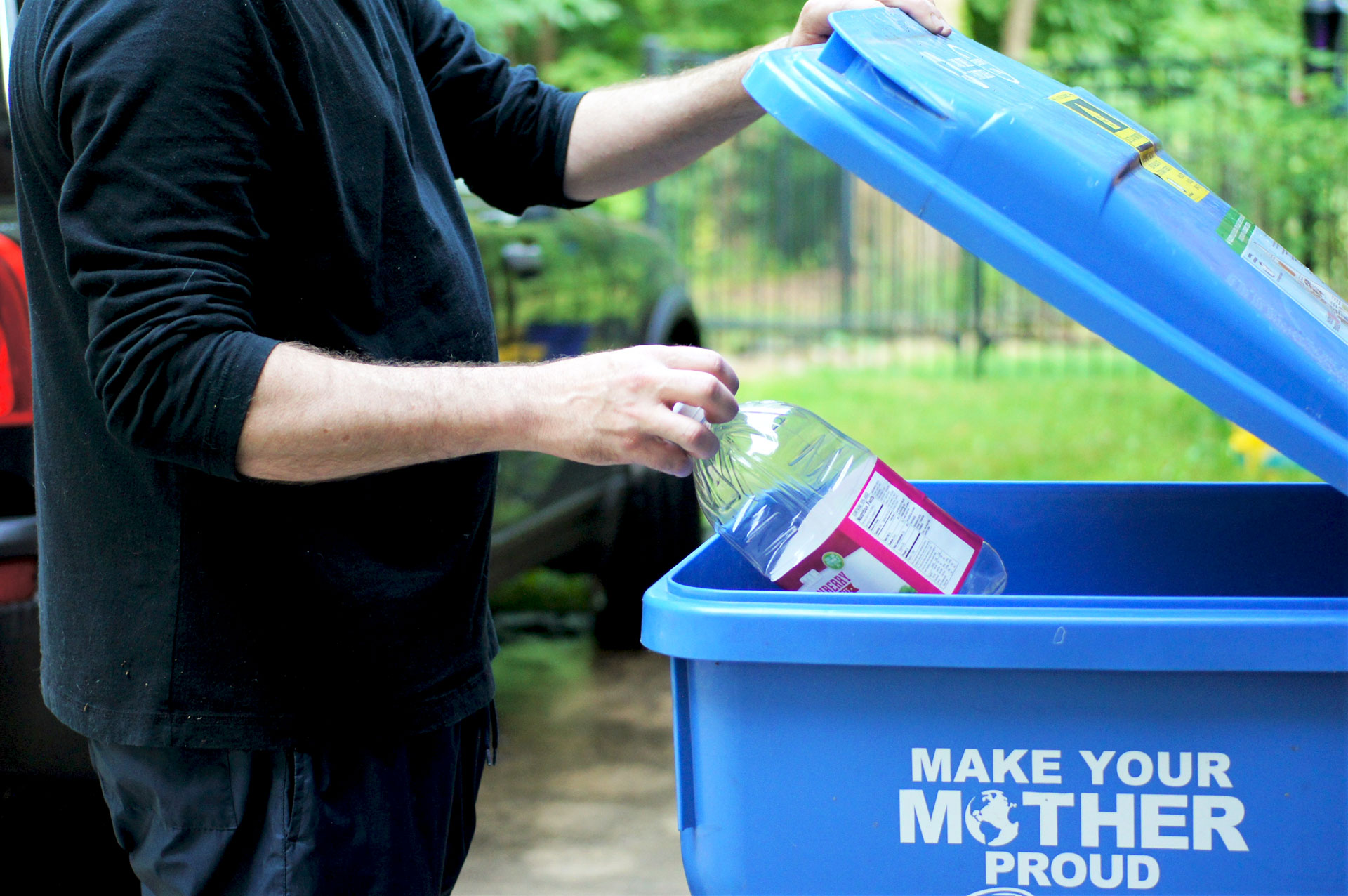 What to Know Before You Throw

“The process is both complex and expensive [so] the cups are routed to landfills or incinerators for final disposal,” Meidl says. “When people erroneously place the coffee cups into their recycling bins, it contaminates the higher value plastic that can be recycled.”

Although a report by Clean Water Action found that manufacturing conventional polystyrene products used less energy and water than paper or cornstarch alternatives, the single-use plastic is ubiquitous in landfills where it takes thousands of years to decompose, contaminates soil and water and pose hazards to wildlife. Coffee and other hot liquids can cause styrene to leach from cups; the chemical has been linked to a host of health problems from impaired concentration and nervous system effects to cancer.

Meidl notes that technology exists to recycle polystyrene foam — though many curbside programs do not accept it in their systems — while “paper cups are notoriously difficult to recycle due to the plastic lining.”

Your Plastic Iced Coffee Cup is an Environmental Menace

The plastic cups used for iced drinks are also problematic. Most are made from polypropylene (#5 plastic) that is not accepted in many curbside recycling programs. Spill the Beans in San Diego is one of the coffee shops serving iced drinks in cups made from polyethylene terephthalate (PET) that is recyclable (though recycling rates for PET is less than 30 percent).

To avoid the cup conundrum, take your own mug. Coffeeshops often offer small discounts to customers who bring their own cups (at Starbucks, the discount is 10 cents). In Berkeley, California, coffee drinkers who want to take their dark roast to go will pay an additional 25 cents for their cups thanks to a new ordinance aimed at reducing single-use plastics. The fee goes into effect in 2020.

The Trouble With Coffee Cup Lids

Plastic lids might prevent spills but Meidl notes that the single-use items are typically made from polypropylene or polystyrene #6, a petroleum-based plastic that is difficult to recycle.

“Recycling and converting used polypropylene into reusable plastic is often too costly to be profitable” she says. “The sorting, cleaning, and melting of polypropylene is more expensive than creating virgin or new polypropylene lids.”

When coffee cups are tossed into the recycle bin with their lids attached, the components have to be separated before they can be processed in separate recycling streams.

Starbucks redesigned its lids to provide a straw-free sipping option, calling it an “environmental milestone,” but the new sippy cup-like lids have faced harsh criticism for using more plastic than the straws they replaced. One analysis found that the new lids added .32 to .88 grams of plastic to each drink depending on its size.

“Making cups out of single materials…does make them more recyclable [and] you could argue that integrated sippy cup could be more likely to be recycled and less likely to have straws getting into the marine environment,” Mulvihill says. “But the argument against is that you’re using more plastic than you were before and a straw in the landfill versus a sippy cup lid in the landfill is not really moving the needle.”

Skipping the lid altogether is a better alternative, which is what manager Connor Nerat sees happening at Spill the Beans, “More people are asking for no lids on their iced drinks.”

How Restaurants Replace Styrofoam and Plastics

Cut Plastic and Other Trash Out of Your Kitchen

The Environmental Impact of Food Packaging

What’s Up with The Paper Sleeves on Your Coffee?

The paper sleeves that make it easier to hold a scalding cup of coffee were supposed to cut down on waste over “double cupping” to keep cups cooler. Dunkin’ Donuts started using sleeves with recycled content. Starbucks introduced a new sleeve made with a higher percentage of post-consumer content in 2012; the coffee giant estimates that the move will save 100,000 trees per year. Spill the Beans uses sleeves made with recyclable and compostable paper.

“We do actually recycle waste cardboard; we re-pulp it and turn it into things like coffee sleeves,” Mulvihill says. “You can put it in paper recycling stream. From a lifecycle perspective, the thing that is most likely to have a previous life and have another life and it’s also advantageous because it’s cheaper than virgin fiber.”

What’s Wrong with a Spoon?

Plastic stir sticks are being replaced with more environmentally friendly options made from materials like bamboo, sugarcane and paper but think twice before grabbing one to mix in cream and sugar.

“Choosing between a bamboo or wood or plastic stir stick feels like…a minimal inconvenience to get rid of,” Mulvihill says. “What’s wrong with a spoon?”

The Need for Single-Use Plastic Bans

While efforts to create coffee cups and components that have a lighter environmental footprint are laudable, banning single-use plastics must be considered as part of the bigger picture, Meidl says.

“At first glance, solutions may seem like an eco-friendly and sustainable answer to our environmental afflictions,” she says. “We should fully understand trade-offs and unintended consequences across the entire supply chain.”

Instead of trusting that swaps made in the name of “going green” are actually better for the environment, remember that saying no to single-use plastics is the most eco-friendly choice.

What You Can Do

Get the latest food news, from FoodPrint.

Dining Out Sustainably Food & The Environment

What Are Fungi, and What Do They Have to Do with…Everything?

What is the Role of Agriculture in Climate Change? A Conversation with a Food Policy Expert

Ready to Challenge Yourself to Create More Sustainable Food Practices?

Looking Ahead: Top Food and Agriculture Stories for 2021

Science Supports the End to the Reusable Coffee Cup Ban